Benjamin "Benny" Ball is a character in Top Cat. He was originally voiced by Maurice Gosfield. Avery Schreiber voiced him in Top Cat and the Beverly Hills Cats.

Benny the Ball is Top Cat's right-hand man, but T.C. looks out for him as well. An example of the lengths to which Top Cat will go to help Benny is illustrated by the episode "A Visit from Mother", in which TC arranges for Benny to appear as if he were the Mayor of New York City.

Benny may appear to be simple-minded, but he manages to ask the most logical questions during the gang's erratic endeavors. He is often times naive, innocent and slow, but not stupid. The bond between Benny and T.C. is based on a sincere, devoted friendship between them. Benny has a tendency to complain that he's hungry at inappropriate times. He also appears to be something of a mama's boy.

Benny is a rather short and chubby cat with blue fur, and a cream colored muzzle that takes up most of his face, unlike the rest of the Gang. His tail is short and stubby, almost triangular at times, almost like that of a young kitten's tail. He usually wears a white cardigan, buttoned at the top with a single button. Unlike the other cats, his eyes are portrayed as small little dots. 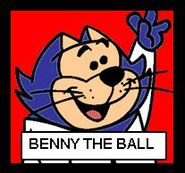 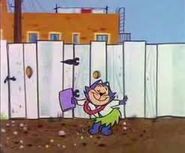 Benny is playing at the violin 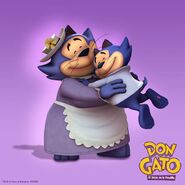 Retrieved from "https://topcat.fandom.com/wiki/Benny?oldid=10236"
Community content is available under CC-BY-SA unless otherwise noted.